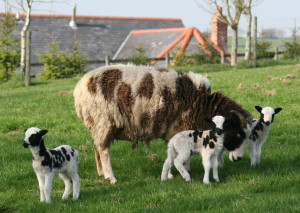 Huxtable Farm is set within 80 acres of rolling countryside and woodland. It offers panoramic views, quality en-suite B&B farmhouse accommodation, a Devon Wildlife farm trail and is home to a flock of Jacob sheep which were originally purchased from the, near by, National Trust property Arlington Court in 1993.

The Jacob Sheep is an ancient breed of horned sheep. It is a dual purpose sheep, providing tasty sweet meat and high quality wool. These unusual black and white sheep are also popular for their unique appearance. 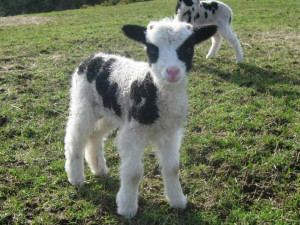 As a spinner & knitter my interest was originally in the fleeces because their wool is soft and with the brown and white patches offers a variety of natural shades from light cream, grey to dark brown. Not only do they produce excellent wool, they usually lamb twins trouble-free and provide superb, lean, flavoursome meat, due to the sheep grazing more than grass i.e. nibbling leaves from trees, brambles etc.

Today, we have a reduced the flock to five Jacob ewes with nine of this years Jacob lambs.

Lambing took place in March, as a Jacob ram joined all the ewes in October. (The ewes are pregnant for 21wks). 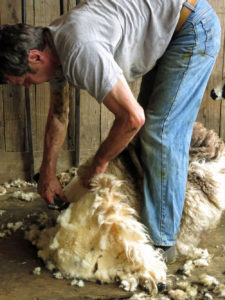 Shearing usually takes place during June. The colours in their fleeces are sorted into light and dark, whilst the lambs fleeces are left as they are to create the grey wool, producing a variety of natural, un-dyed colours.

During the past few years the fleeces have then either been;
Sold raw to spinners and felters (keeping a few for myself to spin of course)
Sold to The Natural Fibre Company to be mixed with Mohair to produce cloth for a well-known British clothing company.
Sent away to The Natural Fibre Company in Launceton, just across the boarder into Cornwall to be;
a. Washed and carded into washed & carded fleece and sold to spinners and felters.
b. Washed, carded and spun into double knitting yarn.
c. Spun into yarn ready to be sent to Curlew weavers in Ceredigion, Wales, to be woven into beautifully soft cloth to produce scarves, shawls, knee rugs, cushions and throws.
All to make beautiful Jacob sheep products available to purchase.

Information on Jacob sheep from the Jacob Sheep Society 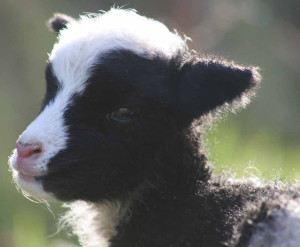 The Jacob Sheep is an ancient breed of horned sheep. It is a dual purpose sheep, providing tasty sweet meat and high quality wool. These unusual black and white sheep are also popular for their unique appearance.

Some features about Jacob sheep; 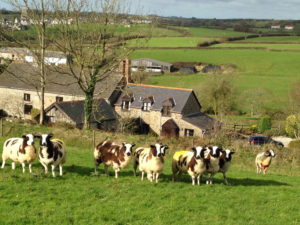 The history of Jacob sheep

The origin of Jacob sheep is not known with any certainty. One belief is that they came originally from Mesopotamia (Iraq, northeastern Syria, southeastern Turkey and southwestern Iran) as they are closely related to the fat-tailed sheep of the Middle East. The first flocks in this country were imported from the former Cape Colony, the breed having been established by settlers from Spain and Portugal.

The Jacob sheep takes its name from the story told in the Old Testament Book of Genesis of how Jacob became a selective breeder of pied sheep. “I will go aboute all thy shepe this daye, and separate fro all the shepe that are spotted and of dyverse colours, and all blacke shepe among the lambes and the partie and spotted among the kyddes: And then such will be my reward.” ‘The fryst book of Moses, called Genesis’, William Tyndale, 1530. Jacob’s pied sheep travelled from Palestine to Egypt. Over the following thousands of years, so it is said, the descendants of Jacob’s sheep travelled to Spain via 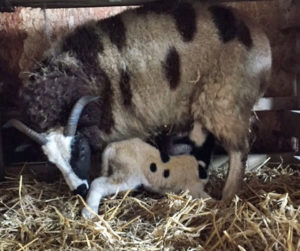 the coast of North Africa and Morocco. In the 17th and 18th Century, Jacob Sheep were imported from Spain by the British landed gentry. The oldest known flocks which were imported in the 1750s still graze at Charlecote Park in Warwickshire. The Jacob breed with its splendid horns and distinct spotted fleeces made it an ideal ornamental sheep to graze with deer in parklands surrounding castles and stately homes. By the end of the First World War, many of these flocks had disappeared and by the mid part of the century there were very few Jacob sheep. A small number of dedicated breeders and enthusiasts were determined to preserve the breed, and in 1969 the Jacob Sheep Society was formed with 96 members and 2,700 registered sheep.