World Book Day – A freezing cold day great for curling up with a good book.

We’re so lucky in North Devon to have a variety of great authors, past & present and books about North Devon 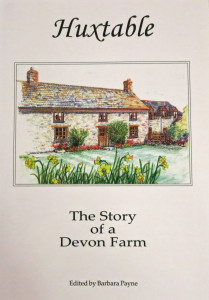 Book all about – Huxtable Farm – The story of a Devon Farm

‘Huxtable The Story of a Devon Farm’ can be purchased at £7.50 plus P&P Contact jackie@huxtablefarm.co.uk

Henry Williamson ‘Tarka the Otter’ – Follows an otters joyful water-life and death in the country of the two rivers, Taw and Torridge. The ‘Tarka Trail’ passes the entrance to Huxtable Farm B&B.

R F Delderfield’s ‘To Serve Them All My Days’  – First published in 1972, the book was adapted for television in 1980. Set between WW1 and WW2 the book is follows a young shell- shocked man’s life as a master at a remote Devon School. R. F. Delderfield’s time at West Buckland School served as an inspiration for ‘To serve them all my days’

R D Blackmore ‘Lorna Doone’ – A romance of Exmoor, based on a group of historical characters and set in the late 17th century in Devon and Somerset, particularly around the East Lyn Valley area of Exmoor

David Kennard ‘A Shepherd’s Watch’ – David Kennard lives a life most people can only dream about. Farming on a spectacularly beautiful part of the Devon coast he has an almost telepathic bond with nature and with his working sheepdogs.

Norma Huxtable ‘Positively The Last Word on Exmoor’ –  Norma Huxtable a farmer, landlady, writer, wit and all-round exposer of the social scene that makes Exmoor such a unique place to live

Veronica Henry ‘The Long Weekend’ , ‘A Night on the Orient Express’ and many more page turning romance novels. One of my favourite present day novelist.

Charles Kingsley – Westward Ho! (A north Devon seaside town near Bideford, with a large sandy beach & unique pebble ridge) – A novel was based on the adventures of Elizabethan corsair Amyas Preston who sets sail with Sir Francis Drake, Sir Walter Raleigh and other privateers to the New World, where they battle with the Spanish.

Save the Date: 21st – 29th September 2018 for Appledore’s Book Festival – When you get a chance to meet some authors.

Which ever book you read today stay safe and warm